ShooterBattle RoyaleCraft
BuildRoyale.io is a 2d shooter io game where you must build and loot to upgrade your weapons to defeat all your enemies. Build, break, and eliminate opponents to upgrade your loot. Will you be the last one standing?

Upon readying up, you will be put into a lobby.
During the pre-game lobby you will be able to practice your building with 100 of each material, play soccer/basketball, and interact with the other people in the lobby.

Once enough players have joined, you will be put into the actual match at a random spot on the map so you have to gear up by opening chests and picking up floor loot to start to eliminate opponents.

Another important part about early game is gathering materials. Trees, tables, chairs, etc will give you wood, rocks give you brick, and only a couple items around the map give you metal, making it the rarest and most effective material to use. As the game progresses make sure to keep checking the map with M because the red storm will slowly be closing in. If you are caught in the storm you will take damage and that damage amount increases the longer the game goes, so getting caught in it at the beginning isn't a huge deal. Also make sure to stock up on heals in case you do get shot or caught in the storm.

If you survive long enough, with enough building and shooting skills you could win the game or end up at a close second or third place.

Will you be a Master Builder?

In BuildRoyale there are 5 different rarities for weapons:
- Gray is common
- Green is uncommon
- Blue is rare
- Purple is epic
- Gold is legendary.
As you eliminate opponents, you can loot them to upgrade your inventory.
- Shotguns are used to fire a lot of bullets at one time and are good at close range.
- SMGs fire bullets quickly but their range is limited.
- The Scar and AR-15 are great medium-range weapons, however the AR-15 does slightly less damage but makes up for it in accuracy.
- The Scoped Assault Rifle is good for dealing damage at medium and long range and has a longer scoping radius than the regular assault rifles.
- The Rifle has 3 shots, does a large amount of damage, and is great for long-range combat.
- The Bolt has a single shot that when hit does an extremely large amount of damage, but you have to reload before being able to shoot it again.
Also remember if you see bullets coming toward you, build! 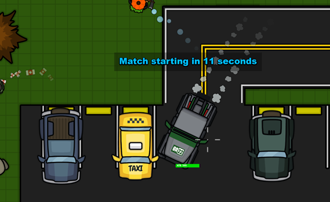 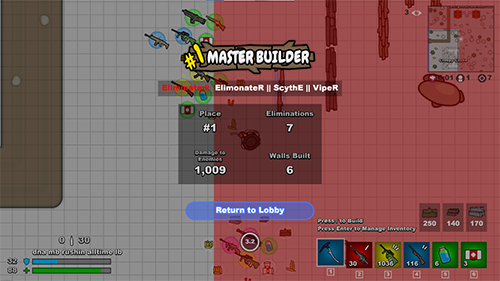 COMMANDS - You can change the commands on the Settings Button