ShooterTeamRobot
Clanker.io is an isometric pixel art shooter io game where you must fight and loot weapons to defeat all your enemies. Play this fast paced mech shooter. Control a battle mech and survive as long as you can in a deserted mining station.

When you enter the game, you are part of a team. Your enemies are indicated in red. Go towards the red rectangle to know their position in the map.
HUD around your mech indicates its current status. Large arc represents remaining hull while the bar below is your shield level. Follow red points to find your enemies.

Damage will first get absorbed by a force field around the mech. When it's depleted hull gets damaged until the mech is destroyed.

Mech can focus energy in front of it to reduce damage dealt to the shield. The shield itself recharges to 50% over time. Find pickups to go beyond that.

For the first few seconds after the respawn mech is immune to damage but it's weapons are disabled.

Every time you kill an enemy you get a rank up and earn gears which you can trade for different mechs.

Will you be a Master Clanker?

In Clanker.io there are different weapons to improve your strategy:
- Mines - You can use mines as an offensive or deffensive weapon. Spider mine will find its way to the nearest enemy. A mine can be taken down with a few accurate shots.
- Flak Cannon - Shoots a fan of accelerated particles. The closer you are the more chance they all land in your opponent.
- Grenade Launcher - Fires explosive grenades that shrapnel through all nearby targets.
- Railgun - Can pierce many targets at once.
- Rocket Launcher - It launches homing missiles that will follow the cursor until they lock on a nearby target.
- Tesla Coil- Powerful but short ranged weapon. Fires a lighting bolt that arches to the nearest enemy. 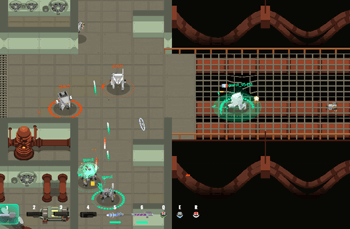 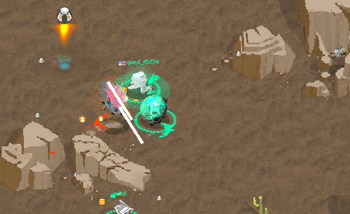 COMMANDS - You can change the commands on the Settings Button

Movement: W, A, S, D
Dash - Double tap movement key to quickly strafe in that direction. Use it to avoid projectiles and travel faster.
Bash - To bash, tt's a special move that will disable enemy. If the enemy is using focused shield you will be disabled aswell.
Change weapons - 0-6
Offensive mine - Q
Defensive mine - E
Heal - R
If you like to play shooter games, you might also like Shootup.io. Looking for more pixel art games? Try out Triset.io or Footix.io, and if you like Battle Royale games, you suggest you Buildroyale.io or Tankroyale.io